Is The United States Ranked In The Top 5 Worldwide For Doing Business?

The World Bank recently released its annual rankings of the best places in the world to do business.  Around the world, these annual rankings are watched closely by policy makers and business leaders.  They have gained an outsized influence on economic and industrial policy, particularly in the developing world and in those countries where the World Bank is most active.

And yet, it can be argued that they measure the wrong things for the 21st century. Doing Business in 2018 is about investing in talented people and innovation, not low tax rates or minimum regulatory frameworks.

This year’s top five countries are: New Zealand, Singapore, Denmark, Korea and Hong Kong.  All are geographically small, well-managed countries. The United States comes in at Number 6. It is quite an achievement for the world’s largest, most complicated economy to rank so highly. At the bottom of the list are countries such as Somalia, Eritrea, South Sudan and Venezuela – countries torn by internal conflict and upheaval.

In the “Doing Business 2018” report, World Bank researchers measure 11 variables that they believe are important indicators of a nation’s business dynamism. There are several variables directly related to individual businesses, such as the ease of starting a business; getting credit, or registering property. The report also measures several “regional” variables, such as the ability to get electricity and secure construction permits. At the national level, the report looks at public policy affecting international trade, tax collection, protection for minority investors, insolvency, contract enforcement and labor market regulation as important factors to measure the vibrancy of the private sector in any nation. 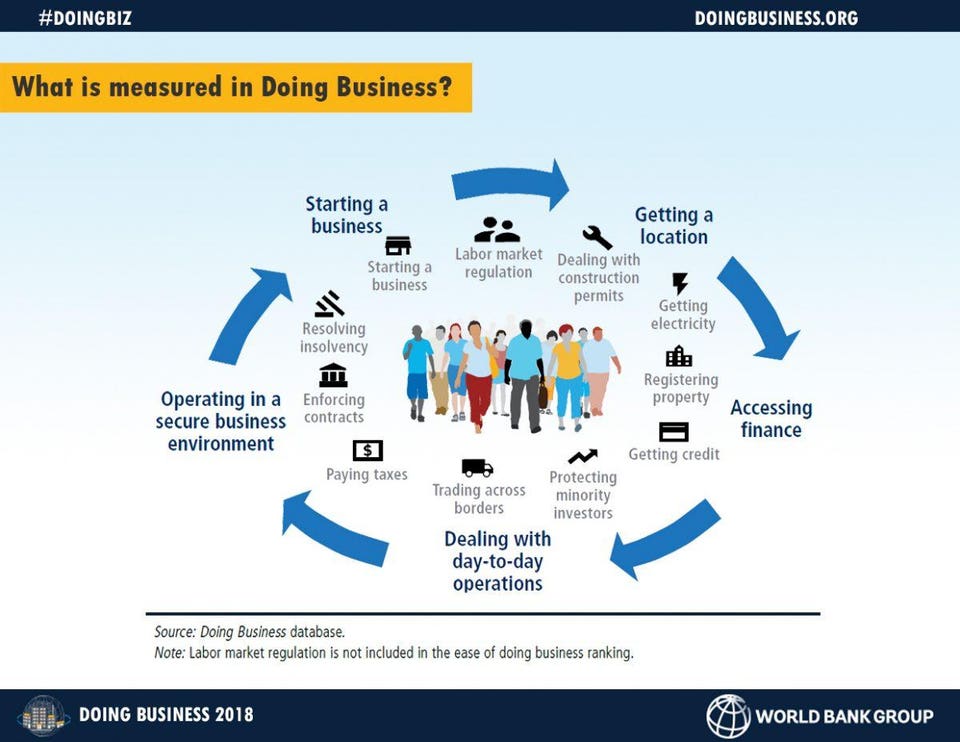 There is no doubt that these are important measures of the ease of doing business in a country. They are universally applicable from Silicon Valley to the most rural village in Africa. There is enormous merit in measuring “apples to apples” and identifying short-term, tangible policy and regulatory actions that can jumpstart the private sector. They also align with World Bank strategy in many developing countries.

However, it is not clear if these variables are the most relevant for the 21st century. Nor is it clear that economic policy, even in the developing world, should focus on these factors as a primary means of improving their business climate.

It is for these reasons that many economic rankings, similar to the Doing Business report, have discarded traditional measures to focus on variables that are relevant to the innovation-driven, entrepreneurial economy. For years, there were reports by conservative think tanks that would celebrate the merits of states like South Dakota and Montana as being the most business-friendly in the United States because of the minimum regulation they placed on their companies. These states were considered the easiest states in which to manage businesses, had the loosest labor and environmental regulations, and the lowest tax rates.

But at closer inspection, the capital and economic growth in the United States has been in the states on the opposite side of those rankings.  Even today, according to Richard Florida, nearly 70% of venture capital in the United States is invested in companies in California, Massachusetts and New York, which are states with high tax rates, strict labor and environmental rules, and complex rules for business to follow.

It turns out that capital follows innovative ideas and talented people, not low tax rates or places where its easiest to secure permits. If 50% of GDP and more than 50% of the jobs are created through innovation and high-growth startups, then it makes sense that the ease of doing business should be measured by the factors that will attract and support innovation and high-growth startups. That is not what the Doing Business rankings measure.

Just last month, Amazon received 238 proposals for its “HQ2” from cities and states from across the United States, Mexico and Canada.  Amazon has promised to make this second headquarters a center for innovation and to hire up to 5,000 employees. While Amazon will no doubt negotiate hard for low taxes and government freebies, their proposal prioritized cities that could provide global connectivity, access to talent, partnerships with R&D centers and a vibrant urban culture. Most odds-makers, in calculating the chances that various cities would win the Amazon HQ2 bid, rarely looked at the factors used by the World Bank Doing Business report and instead looked at factors related to the knowledge economy.

There are those who argue that the Doing Business Report correctly measures variables that are relevant to emerging markets and developing countries. This, too is not clear. Economic growth in India and the Philippines over the last twenty years has been driven by the information technology industries and is not primarily the result of reduced government barriers to business. One can legitimately argue that the difficulty of doing business in India has prevented the nation from growing even faster than it has. But India’s long-term investment in education, workforce training and innovation created an IT industry that competes with the richest countries in the world and has transformed economic opportunities for the whole nation.

If the variables used by the Doing Business report to measure private sector vibrancy are important, but variables related to building an innovation economy are equally important, then where should policy makers and business leaders focus their efforts? The answer…is both. Doing Business is a great methodology for identifying short-term, but important changes to regulations, public policies and business culture that politicians can implement during their political lifetimes. Creating the next Silicon Valley is a decades-long investment in education, infrastructure, R&D and financial markets that must be done, but will provide limited short-term political benefit.

This article was written by Nish Acharya from Forbes and was legally licensed through the NewsCred publisher network. Please direct all licensing questions to legal@newscred.com.

The views expressed by the author are not necessarily those of Fifth Third Bank and are solely the opinions of the author. This article is for informational purposes only. It does not constitute the rendering of legal, accounting, or other professional services by Fifth Third Bank, National Association or any of their subsidiaries or affiliates, and are provided without any warranty whatsoever. Deposit and credit products provided by Fifth Third Bank.

How to Build an Engaged Workforce: Focus on Employee Experience

4 Ways to Prepare Your Business for Global Transactions